This post originally appeared on the Open science lab for biodiversity blog and is republished here with permission. The development of CROW was not funded under GloBAM, but the tool will likely be used and extended for GloBAM.

Every spring and autumn, millions of birds migrate over our country. They mainly do this at high altitudes and at night, making this phenomenon largely invisible to us. But not for weather radars!

Today the Open science lab for biodiversity at the INBO and the Royal Meteorological Institute of Belgium (RMI) are launching a web application allowing anyone to view this migration in real time across the Benelux. It shows that bird migration started exceptionally early this year, caused by the unusually warm weather in the second half of February. The development of the website was co-supervised by the Royal Belgian Institute of Natural Sciences (RBINS) and financially supported by the Federal Science Policy (BelSPO valorisation project CROW). 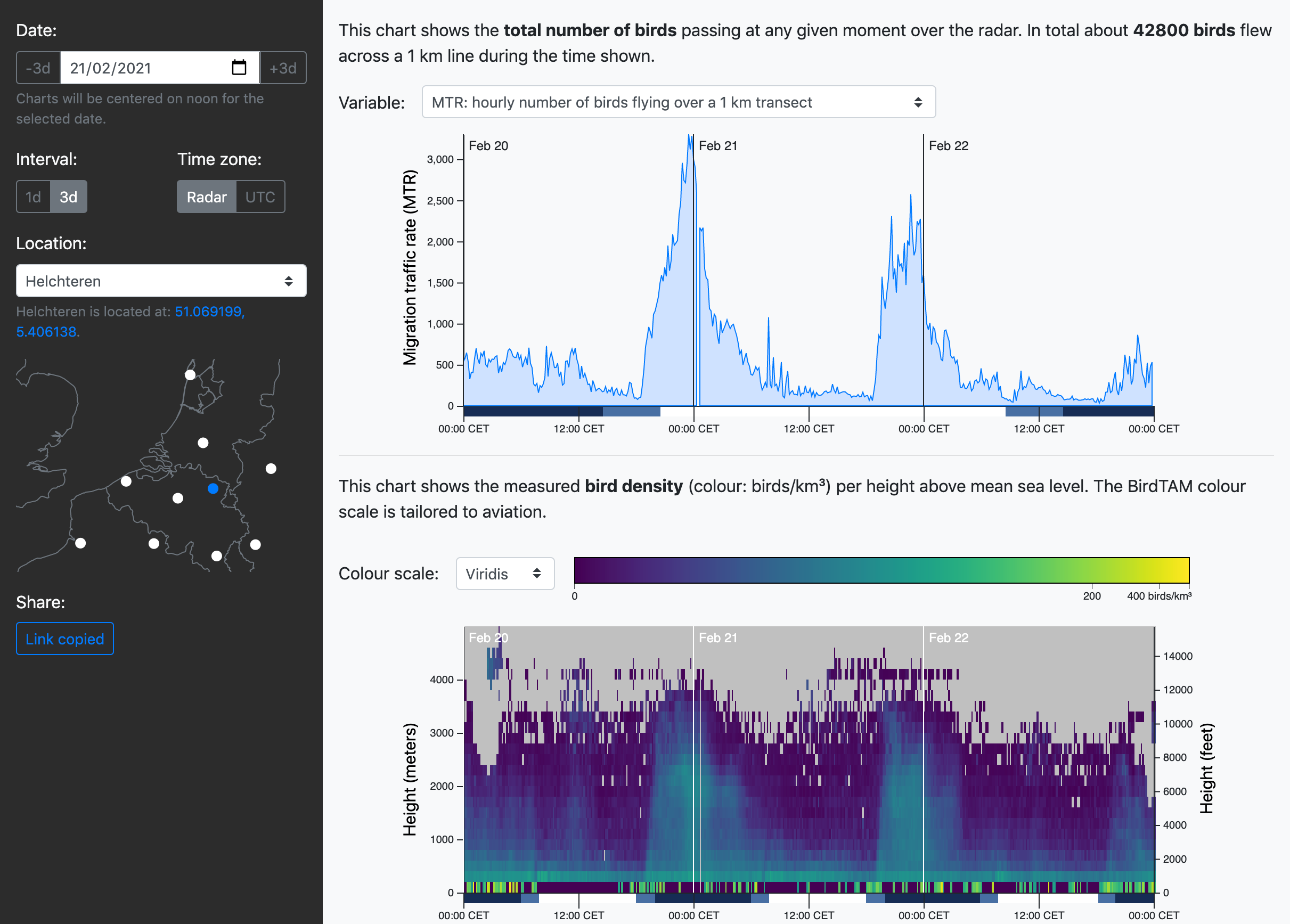 The new web application, showing the Helchteren radar for a three days period around February 21, 2021. Due to the exceptionally warm weather during that period, spring migration started earlier than normal. From the figure it is also clear that the most intense migration always takes place in the first half of the night. The birds reach heights of up to three kilometers (and sometimes even more).

What does meteorology have to do with bird migration? A lot, it turns out, and in both directions. Birds wait for the ideal weather conditions to start their long journey to their wintering grounds in the south and back to their breeding grounds in the other direction. But equally intriguing is the fact that one of the most important measuring instruments in meteorology today, the weather radar, can measure this migration in detail. Indeed: weather radars do not only detect water droplets in the atmosphere, but also birds moving through the air.

The website launched today offers a unique overview of bird migration across the Benelux, based on ten weather radars located in Belgium, the Netherlands, France and Germany. The graph that is shown first when loading the website is the so-called “MTR” (Migration Traffic Rate). This parameter expresses the number of birds that pass through the vicinity of the radar at a given moment, through an imaginary screen that is 1 km wide and “infinitely” high (in practice, 5 km is taken as maximum height). It can be compared with the “stream” or the “flux” of birds that “flows” through the air.

The colourful figure underneath shows how these birds are distributed across the vertical layers of the atmosphere. The parameter shown in this figure is the bird density, expressed as the number of birds per cubic kilometer. However, certain assumptions have to be made to arrive at this number (e.g. about the typical size of a migratory bird). It also excludes bird movements close to the ground, as radars are not able to detect those. More explanation about the correct interpretation is provided on the website itself.

As usual for our team, we developed this tool as open source software. We hope to extend it to visualize even more open bird migration data for the GloBAM project.